The following review is a guest post by Jason Kaneshiro. Jason has also contributed numerous iPhone app reviews for Switching To Mac.

Game Concept: Color squares for points against several opponents in this turn-based board game. 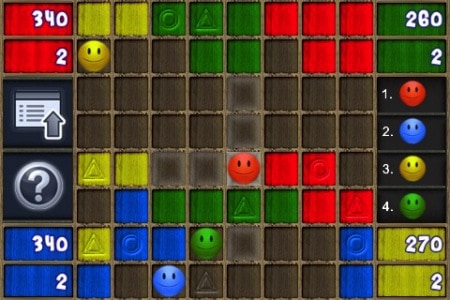 Simple rules create deep gameplay: Move one adjacent square horizontally or vertically and turn the vacated square your color. Jump two squares horizontally or vertically, and all adjacent squares turns your color. Tap your current square to jump to a random, empty square. You can only move to open squares that haven’t been colored yet. Moving a single square turns out to be rather defensive, while jumping is required to grab territory. But if you can jump to a particular square, so can your opponent, and as a result, seemingly awesome moves can be undone not soon after.

You can have up to four players set to either human or computer opponents. The game is a lot more fun with four players and defaults to this mode.

Sub-par graphics: your primary piece is happy face, the animation of squares changing color is blocky, and the screens surrounding the game are rather simplistic.

Although My Squares’ graphics aren’t that impressive, there’s a refreshingly compelling strategy game lying just beneath the surface. I’ll be playing this one for a while. The game is available for the iPhone and iPod touch for $0.99 from the App Store.