Straight from the horse’s mouth – Apple says this of the macOS Terminal:

UNIX users will feel at home in Darwin, the robust BSD environment that underlies Mac OS X. That environment is accessible at any time from the Terminal application.

OK, that’s nice and all, but what about us non-UNIX users?

Yes, the Terminal is your gateway to the Darwin core that is macOS. But what on earth does that mean? Here’s the best way I can think of to explain it.

The Finder, that thing you use to sort, re-name, move and delete files – is really just a graphical version of the Terminal. The Terminal is a “text” version of the Finder – and a much more powerful one at that. When you open programs using the Finder (by double-clicking them) they just open. With Terminal, you can launch programs and issue additional parameters – like ‘open x program and then have it open a file’.

To be slightly more accurate, the Terminal is actually an interface to a “shell”. The default shell on the Mac is named zsh (as of 10.15, before that it was “bash”). A shell is the program that reads your text, splits the command (launch x program) from the parameters (open a file when x launches) and then executes them.

Opening the Terminal is pretty easy. Open a Finder window, select Applications, then Utilities, and finally double-click the Terminal. 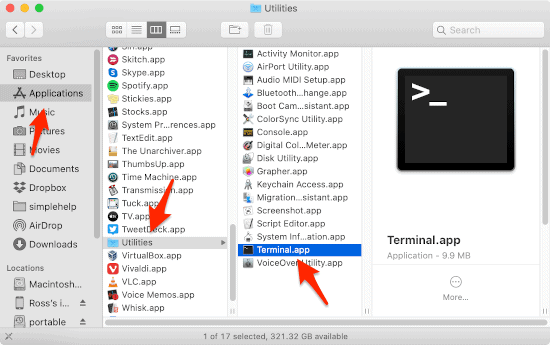 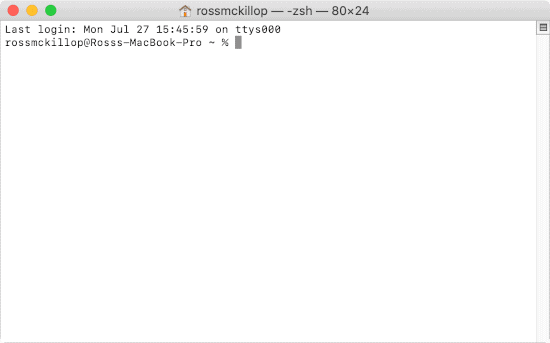 You may want to make it a bit easier to get to the Terminal in the future. Right-click (or ctrl-click for you one-button mouse folks) select Option and then Keep in Dock. Now it’s just one quick click away. 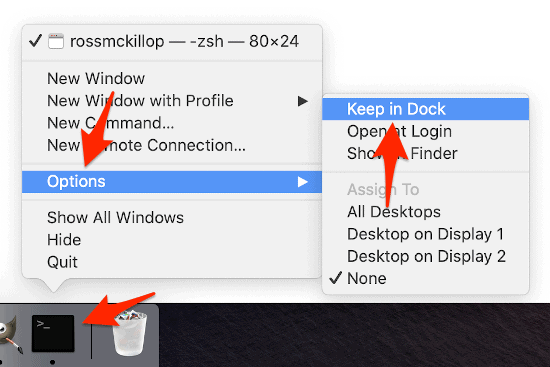 Now let’s make the Terminal at least a bit more visually appealing. With a Terminal open and in the foreground, select Terminal from the menu bar and then Preferences… from the drop-down list. 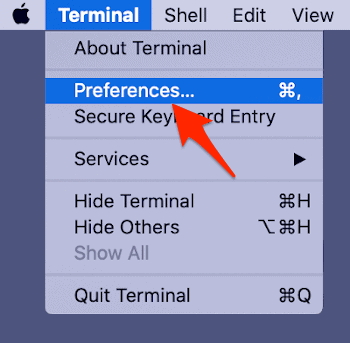 Start by selecting the Profiles tab at the top. On this page you can try out a few of the “pre-made” Terminal designs, which can be found in a column on the left side of the window. Double-click one of them – for example, the Pro design (my Terminal design of choice). 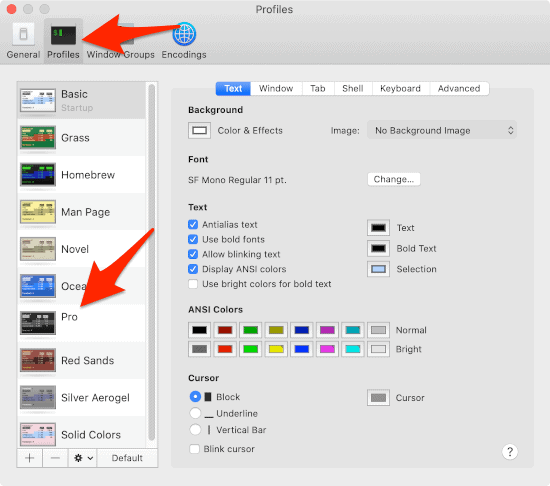 Another Terminal window will open, but this time it’ll be styled differently. 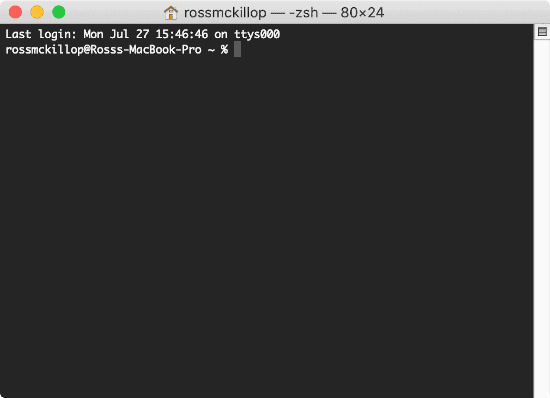 One thing you’ll likely want to customize is the font and font size. To do so, click the Change… button in the Font section.

Make the changes you wish and try them out. 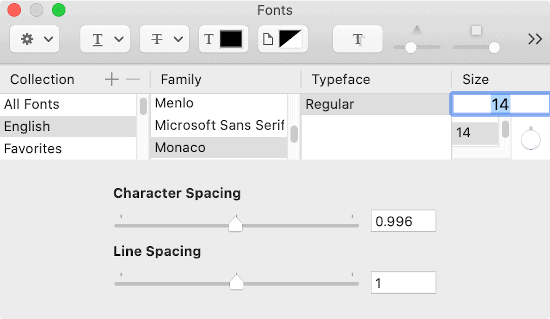 Select the Window tab in the Profiles section. From here you can further customize the Terminal, one you may want to take a close look at is the size. Feel free to check out the other options from all of the other tabs and sections. 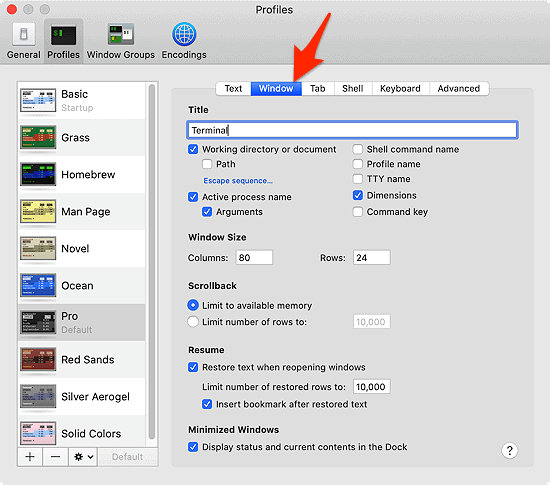 Once you’re happy with the style, font and window size, click the Default button to set your current preferences as the default. 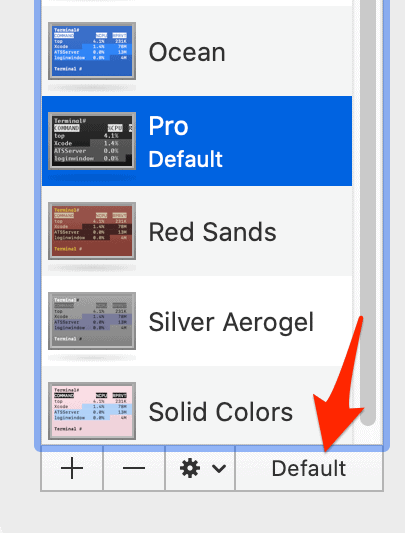 Now select the General tab at the top. Select the profile you ant to open up each time you start up a Terminal from the On startup, open: menu. 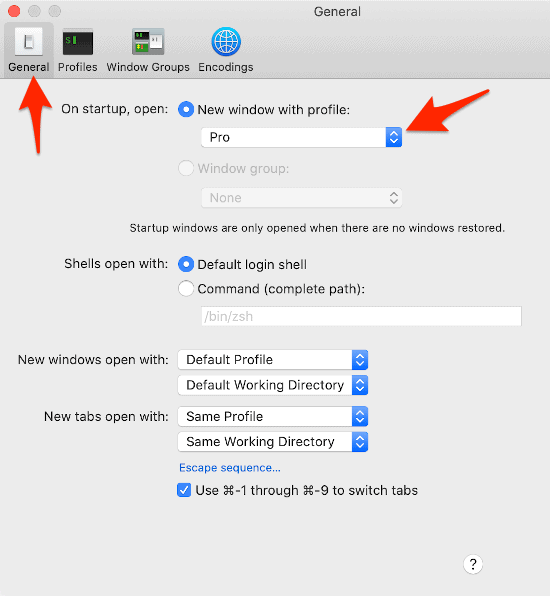 There are a lot of commands. Far too many to outline here. The zsh Guide has all the info you could ask for. Something to keep in mind – Terminal is a bit more unforgiving than Finder. You can accidentally delete, change, and/or otherwise mess things up pretty quickly (esp. if you’re playing around with the sudo command). With that said, once you get used to the Terminal, you’ll wonder how you lived without it. An added bonus – once you do get used to using it, you’ll find that ‘learning’ a Linux or Unix based Operating System is much, much easier.

Home » Mac » An Introduction to the macOS Terminal

2 thoughts on “An Introduction to the macOS Terminal”