This very short tutorial will show you how to figure out which “version” of Android your phone or tablet is using, and why it matters.

Android, the smartphone and tablet Operating System that was created and developed by Google, comes in many versions. The same way Microsoft names their Windows Operating Systems – Windows XP, Windows Vista, Windows 7, Windows 8 and Windows 10 – Google names Android differently with each version.

It can be very helpful to know which version of Android your device is using so that if you have to troubleshoot something, you can drastically narrow down what to search for and how long it’ll take you to solve the problem. One of the most common “issues” is that some Android software doesn’t run (or doesn’t run ‘properly’) on older versions of Android. Another common issue can be the ‘features’ built into Android itself. You may find a tutorial or guide that shows you how to do something, but you can’t find the same buttons or settings on your device. That’s probably due to you having an older version of Android than the tutorial or guide is referencing.

Because each version of Android is different, sometimes the steps to determine which version you’re using can be slightly different. In general – 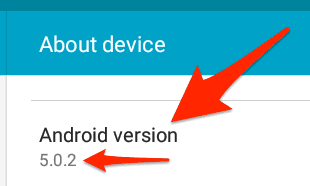 Here’s a list of each “name” Google assigned to the numerical version of Android, from oldest to most current:

If you’re asking what’s with all the sugar, according to Google “Since these devices make our lives so sweet, each Android version is named after a dessert.”

As illustrated in the screenshot above (step #3), my device is running version 5.0.2 – which is Lollipop.

So now if you see something that says “This App requires Android “Ice Cream Sandwich” or later”, that means you’ll need version 4.0 or higher.