Using the small and free program NOMu, your OpenOffice.org documents are just a click or two away. 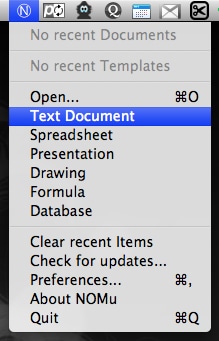 Use your Menu Bar to quickly create OpenOffice.org documentsRead More »

This article will take you through the steps to set up and sync your Windows Mobile device with a PC running Windows Vista. …

I’m a big fan of NeoOffice. I actually prefer Open Office.org to Microsoft Office. So I’m always pleased when new patches and releases are issued, as they almost always include bug fixes. Patch 1 for 2.2.2 is no different.

As an aside, the folks over @ NeoOffice are also providing a list of known issues and incompatibilities in Leopard (OS X 10.5). Though none of the problems are specific to NeoOffice, they’re just providing the list as a service to their users. Pretty cool of them.

This tutorial will take you through each of the steps involved in creating slide transitions using the free presentation software Impress from Open Office.org. …

This overview will explain the various features of OpenOffice.org’s Word Completion – including how to disable it. …

This brief tutorial will guide you through the steps to extract all of the images from a .doc file. Though the screenshots are specific to OpenOffice.org Writer, the steps are nearly identical for Microsoft Word (including 2007). …

How to extract the images from a .doc file using OpenOffice.org WriterRead More »

How to download, install and use Open OfficeRead More »