The first thing I thought was “what on earth is a gooseneck phone holder?”

It’s a fantastic “arm” that easily clamps onto your smartphone or tablet and acts as a stand. The photos will describe it best :) 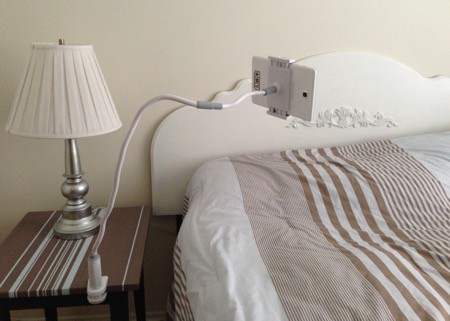 Let’s get this out of the way up front: I was given a free unit to review. As with all of the reviews here, I’m brutally honest about the product whether I paid for it or not. OK disclaimer out of the way.

This thing is amazing. I’m paying for another one out of pocket so that I have two. In a nutshell, one end of the flexible “gooseneck” or “arm” has a clamp that holds your tablet or smartphone. The other attaches to your desk, table, nightstand or … almost anything. The price? $15 via Amazon.

The clamp can hold just about any smartphone on the market. You’d have to be using a freakishly small novelty device or a gigantic “cell phone” from the 80’s for this clamp not to hold it securely. It also rotates 360 degrees, making it that much easier to get the perfect view.

The “spring-loaded” bracket can hold a tablet up to 10 inches wide (or tall). In theory it will hold one of the Samsung 10.1 line of tablets, I don’t have one to try it out with. The list of devices that I own that worked perfectly include: the iPhone 6, an iPad Mini, a Samsung Galaxy Tab A 9.7″, the first Kindle Fire and my old iPod.

The padding that holds your tablet/phone in place is a soft but firm silicon that couldn’t possibly scratch your device. 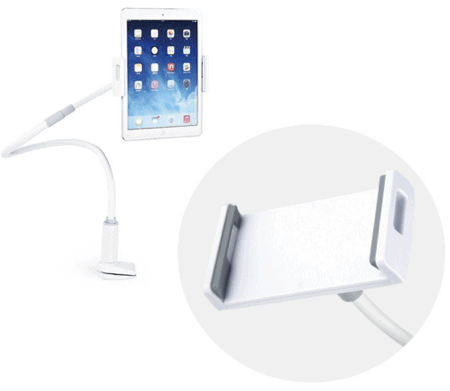 The same holds true for the padding on the clamp that attaches to your desk/table/anything. It isn’t going to scratch or leave a mark of any kind no matter how tightly you attach it (alright unless you really go out of your way to do it on purpose) :) 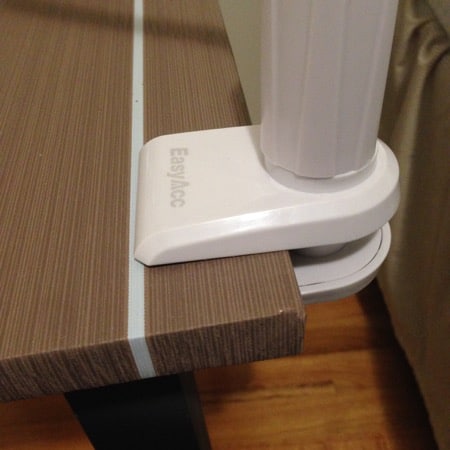 The reason I’m buying another one (aside from me being too lazy to attach/reattach it a few times a day) is that for me, it has 2 fantastic uses. The first is to clamp my tablet to my desk and have it hover above my laptop screen. Then I can use my tablet as a second monitor. I also frequently use my tablet or iPhone to run Spotify and wirelessly send the audio to my Beats Pill speakers (seriously love them too, another review for another day). That means I’m running one less App on my Mac but I can still easily access Spotify itself. 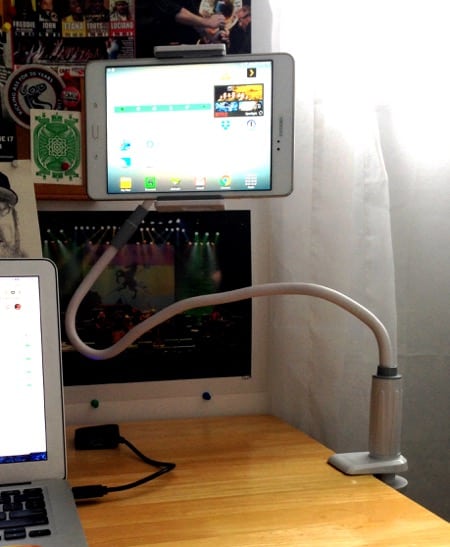 The other use that I can no longer live without is to attach my iPad Mini or Samsung Tab to my nightstand and watch Netflix in bed. Or stream movies/tv shows from my media center. No more trying to balance the iPad on a pillow so I can watch TV in bed! The 360 super-rotating clamp and bend-y but strong neck means you can get your iPad/tablet to the exact right angle for maximum viewing laziness. 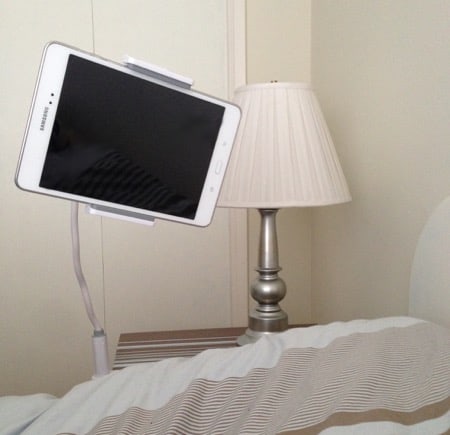 I’ve saved the one negative for the end. While the neck is both strong and flexible, you’re not going to want to tap out long emails when your device is clamped to the device. It’s going to ‘sway’. If you clamp it to a desk and then kick the desk hard enough, it’s going to make the device swing a bit. All you have to do is lightly put a finger on it and it’ll stop swaying right away, but using the touch-screen aspect of your phone/tablet becomes annoying quickly if you’re trying to do anything that involves intensive “tapping” on your screen. That said, it will not ‘slowly bend’ under the weight of your device, unless you’re using something that’s just too heavy and was never intended to be used. For example, the first generation “regular” iPad is too heavy to support.

The device is only $15 via Amazon