Here’s a list of 10 8 free Android TV launchers with reviews and screenshots.

Some are ad supported, and I’ve made sure to clearly point that out in each overview.

HALauncher is my new Android TV launcher. I’ve put this one at the top of the list of 10 in case you just came here to find out which one I recommend the most. This is it.

It’s free but ad supported. Don’t like ads? You can disable them for free. That’s right, in the HALauncher settings you can just uncheck the “Show Ads” box. It’s perhaps the most customizable of all the Android TV launchers in this list. It’s intuitive, doesn’t lag, includes widget support, has a task scheduler (!) and it’s stable. But hey, don’t take my word for it, just give it a try. 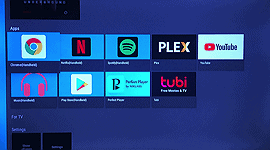 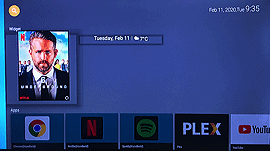 Super insanely simple, so the name is quite apt. Nothing much to it other than app icons on the home screen and customizable wallpaper. It’s a very stable, small launcher. No lag when navigating between apps, which can’t be said for all of the ‘simple’ launchers in this list. The only drawback is that it hasn’t been updated in a few years. An added bonus is that you can also view the source code on github. It’s worth a try if you’re looking for something very simple. 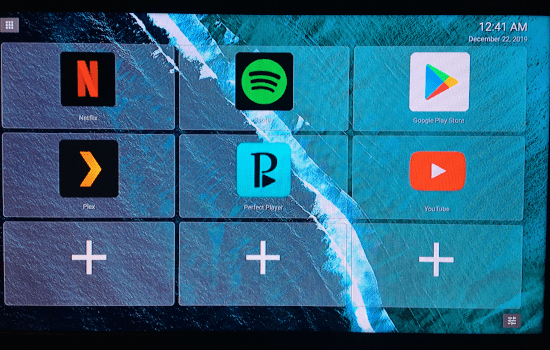 ATV Launcher (Free and Pro) comes with lots of widgets – Chrome Bookmarks, Search, Photo Gallery, Google Feed, Google “at a glance” Calendar, Netflix, Spotify + other App widgets. You can also customize the wallpaper and App shortcuts (name, icon, background image/color). The Pro features (which obviously come at a cost) include: the ability to edit the border radius, column count, “show selection” and “show title”, widget column count, widget row count, and the ability to create folders. It’s worth giving a try but make sure to install the free one first to see if you like it. 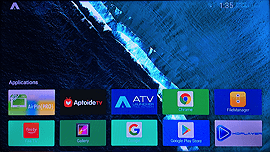 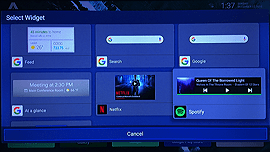 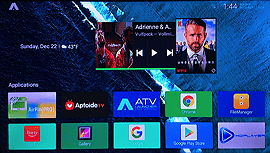 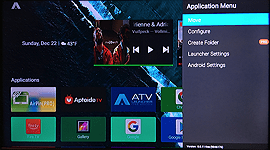 Google Play Store link: https://play.google.com/store/apps/details?id=com.awe.dev.pro.tv
Contains ads which are $2.99 to remove, although they don’t seem to be too intrusive – so far I’ve only seen them in the settings & config screens.

TVLauncher offers light and dark themes, which is pretty cool. You can group Apps into sections/categories, which are editable. Those categories can be displayed as names or as icons. You can also add websites to the home screen, making it even easier to visit streaming sites that don’t have their own Apps. The icons are a bit oddly shaped – some fit nicely, some don’t (see screenshots below). It hasn’t been updated in a couple of years and the developers domain has expired, which is never a good sign. It seems relatively stable though. 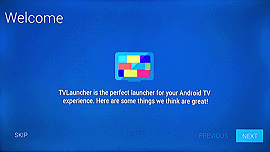 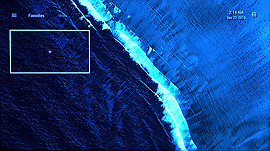 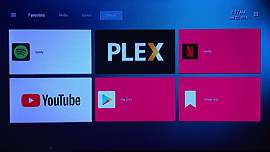 TV Box Launcher looks quite nice. It’s a shame so many of the features don’t seem to work. I couldn’t get the weather feature to function no matter how many ways I tried, and the icons for the Apps only seem to show up some of the time. The shortcut to the Settings didn’t work at all, and I only happened to stumble across another way to access them. The ads worked perfectly though… The selection of included Wallpapers was remarkably good, but no matter how nice it looks it doesn’t really matter with so many features being unreliable. 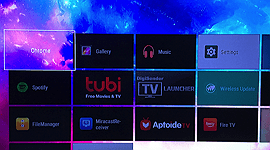 This one is perhaps even more basic than the launcher that came with my device. You can customize the language, and that’s it. You can’t even set the clock to 12hr, it’s permanently stuck on 24hr time. Calendar “coming soon”, but it hasn’t been updated since 2017 – so don’t hold your breath. The icons on the app screen don’t display properly. Pass on this one. 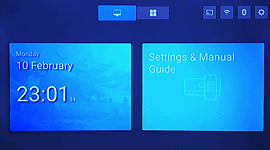 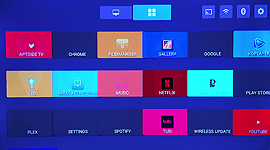 The developer says that this launcher is simple by design, and sure enough – mission accomplished. It’s a list of apps that can’t be resized or customized at all – but you can ‘hide’ them from the main screen, and you can also dock your favourites. With all of that said, the app icons display properly (unlike a number of other launchers) and it seems rock solid (no crashes or glitches at all). Plus, it has been updated in the last 6 months, which is a good sign. If you’re looking for a functional and no-frills launcher, this is the one for you. 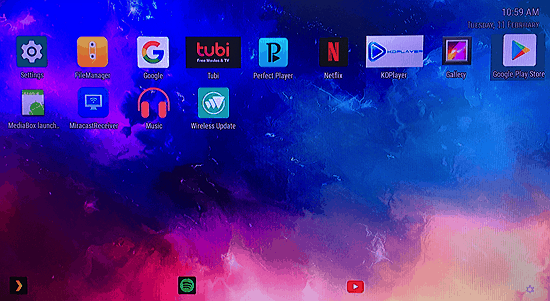 Gal TV Launcher feels like a launcher that had potential, and then development just stopped (hasn’t been updated since 2018). The list of “Youtube Trendings” is actually pretty cool and functions exactly as you’d expect. Otherwise, there isn’t much to it. The full screen ads that are a pain to close and noticeable lag that occurs with each button press makes this a “couldn’t possibly recommend” though. 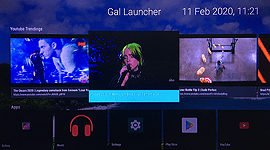 click to enlarge
If this article helped you, I'd be grateful if you could share it on your preferred social network - it helps me a lot. If you're feeling particularly generous, you could buy me a coffee and I'd be super grateful :)